I learned carpentry when I was in high school, and had a great deal of fun building furniture. I even got to build a few simple buildings, like a tractor shed, a chicken coop and a network terminal shed for an underground fiber optic line. I learned in a big, dedicated workshop with heavy, industrial power tools. Once I had to start paying my own rent, I completely lost access to one of my favorite hobbies.

Since then, I've come to realize that the tradition in which I was taught carpentry belongs to the twilight years of New England's small furniture factories. The liminal space that exists between hobby, trade and industry is an awkward one, and perhaps nowhere more than in carpentry (or "woodworking," as it is often called in the hobby context). The appearance of power tools in the late 19th and early 20th century marks the transition of the carpentry trade into an industry.

While a trade can be practiced as a hobby, it is difficult to justify practicing an industry as a hobby. The problems that heavy machines were invented to solve are not technical in nature, but financial. The purpose of table saw is not to cut boards, but to replace some of the wages a business owner pays their employees for cutting boards with interest payments and capital depreciation. It is a machine for someone who has quite a lot of boards to cut, and is motivated to sacrifice space, safety, air quality, peace and quiet, and flexibility for raw speed.

I build things for fun, not for money. So, I have gradually begun to see that the industrial tradition doesn't really make sense as a basis for carpentry as a hobby. It makes more sense to look to carpentry as it was practiced as a trade, before industrialization. Many people are also interested in preserving carpentry traditions as cultural artifacts. I think this is fantastic, and I am eager to learn from such people, but that isn't what I want to do. I just want to make stuff. I'm happy to borrow tools, techniques and concepts from any culture or point in history, as long as it is fun and it fits in the space and time that I have. 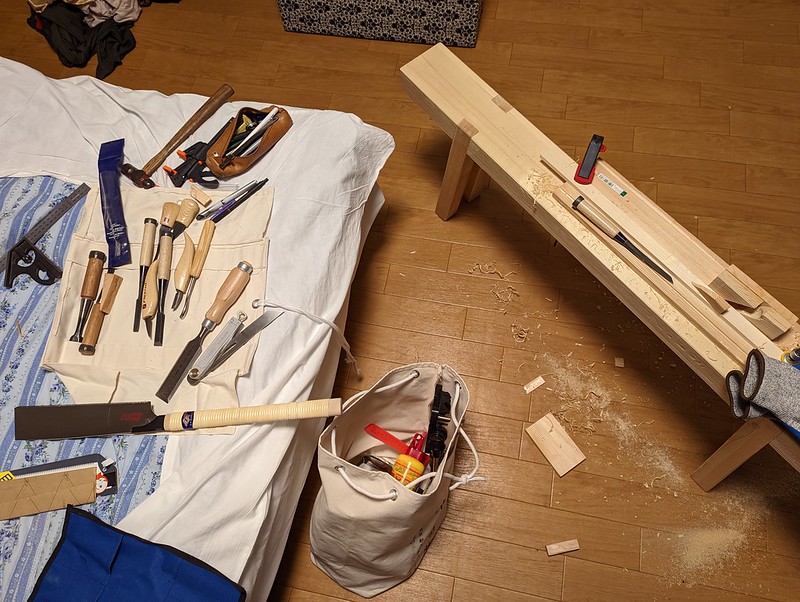 I've built this little Roman-style workbench to fit in the corner of my bedroom. This is my first design, my first workbench build, and my first time working with materials available from the local big box store, in Japan. The outcome is very much a 1.0 experience. But, it seems to be serving its purpose, which is to give me some basic work-holding features. I will probably make a new bench soon, but I thought it would be a good idea to document this build as I add features to it. 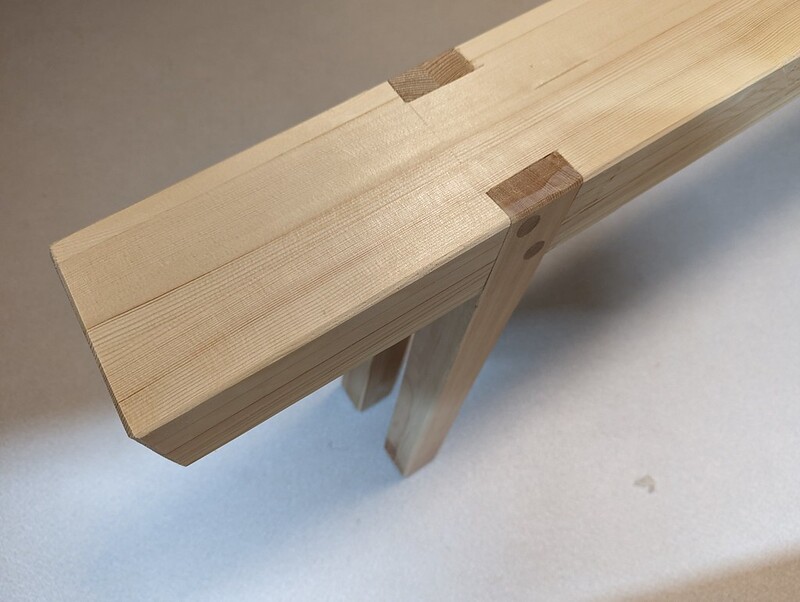 The bench is built from four 150mm by 15mm boards laminated into the top surface, and four 180mm legs. I'm not sure what the leg joints should be called, exactly. The legs are half-lapped with a 10 degree angle, and seated into angled dados and pinned in place with dowels. The result is extremely rigid, and the slight angle makes the bench very steady in the long direction. I usually sit on one end of it when I'm using it, which keeps it stable in the lateral direction.

The idea was to make it narrow enough to fit under the bed, but unfortunately, the bed in our faculty housing apartment is only 80mm off the floor. If I were going to build it again, would have selected slightly wider material for top to make it more comfortable to sit on, but this works well enough for now.